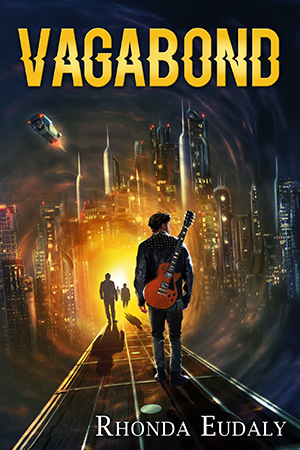 When music and time collide, Vagabond, a rock band on the rise from the present, are thrown into a future where music is strictly regulated by the government. There, they meet Outcast, an underground band of determined women fighting against the censorship, and together work to find a way for the guys to get home.

Then, while they’re recording, three members of Outcast are arrested, facing “rehabilitation” to eliminate their “antisocial” views on music and creativity. Without hesitation, Vagabond signs on to help the tiny group of rebels rescue the captives, even though it could mean never seeing the people they care about again.

Ali Caldwell thought her troubles were over, but she has a new one.

She’s let her grades fall and now she’s on academic probation. She has to get her grades up or leave school.
Everyone is talking about an intriguing study system, but Ali realizes it’s nothing more than cheating. Instead, she studies for hours to get a perfect grade on her next test.
Instead of applauding, though, her teacher accuses her of cheating. To make things worse, the administration is certain that her boyfriend is the mastermind behind it all.
Ali needs to prove that not only didn’t she cheat but that Liam is innocent as well before they both get kicked out of school.

This cover is for The Reluctant Commander by Richard Patton – a novel under the Yesterday’s Imprint.

Twenty-two-year-old George Washington was pleased by his promotion to the rank of lieutenant-colonel and quite content to be the second-in-command of Governor Robert Dinwiddie’s expedition to remove the French from the Ohio Valley.

Then Joshua Fry, the mission’s elderly commanding officer, is killed in a fall from his horse. Washington, whose experience in battle is all but nonexistent, is suddenly in command of the Virginia Regiment at a remote field in the Allegheny Mountains called Great Meadows—and the enemy is coming.

ARC is available for reviewers. Tradepaperback, Kindle, Nook, and more will be available soon.